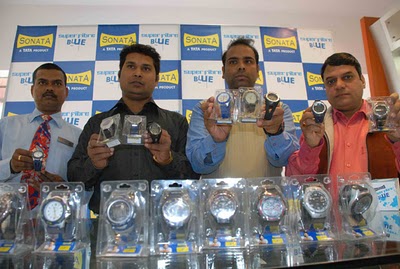 Popular watch brand Sonata, from the Titan Industries has on July 25, 2012 announced a discount of 20 percent on its entire range of products. The new offer has been announced so as to attract the buyers in the state of Kerala during the upcoming Onam festival next month.

The customers can avail the discount from July 26, 2012 to September 2, 2012 across all the ‘World Of Titan’ stores and also multi branded stores. The company announced the offer through Biju Nair, the Sonata Regional Manager, South.

Sonata has an annual sales volume of more than 6.5 million watches sold through a network of more than 10,000 dealers across the country. After the discount the customers can buy the watches between the range of Rs. 199 and Rs. 1,500.

In the state of Kerala the company hopes to sell 1.75 lakh watches during the festive period against last year’s 1.23 lakh watches. During the 2011-12 financial year, the company sold 2.95 watches in the state. The other brands which come under the Titan Industries are, Titan, Fastrack, Nebula, RAGA, Octane & Xylys. The company is a joint venture between Tata Group and the Tamil Nadu Industrial Development Corporation. The product portfolio also includes accessories and jewellery.