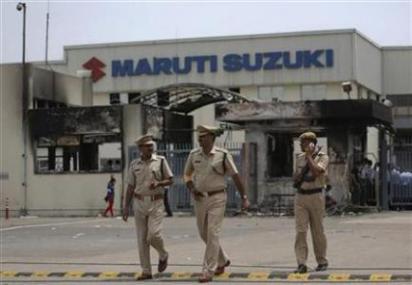 Indian auto giant Maruti Suzuki is facing a costly shut down of one of its plants in Manesar, after its manager died and 90 employees are behind the bars due to a major riot.  The shut down of the plant is expected to last several weeks and this would cost it $15 million per day.

The police said that they want to detain all the 3,000 workers at the Manesar plant in Haryana state. A riot erupted on July 17, 2012 after an argument between the employees. Many people were injured and a portion of the factory’s vehicle assembly has also been damaged.

The violence broke out just nine months after the end of strikes at the facility which cost more than $500 million lost production, spooked investors and even raised the prospects of supply disruptions of Maruti most popular hatchback.

ICICI securities, a brokerage in a report on July 20, 2012 said, “Whenever production resumes, the morale of the executives deployed at the plant would be one of apprehension, fear”. Some of the market analysts predicted that the plant production will be shut for at least two weeks, while the shut down could even last for a month. The company has given no time frame for a reopening.