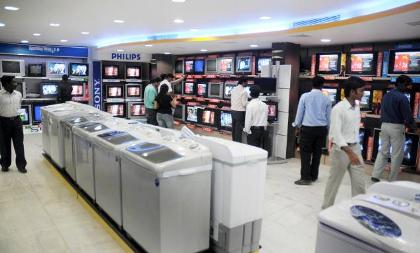 Popular Indian kitchen appliances manufacturer, Godrej on July 26, 2012 said that it is aiming towards a sales turnover of Rs. 2,600 crore this year across the country and Rs. 120 crore from the state of Kerala during the Onam festival.

Kamal Nandi, the Executive producer of Godrej Appliances said that the turnover last year as Rs. 2000 crore. For the festival, the company has launched the Edge Pro Refrigerator, Air conditioners and washing machines.

Godrej has launched the single door new refrigerator on a new platform. It has been noticed that seventy percent of the consumers prefer single door which was more energy efficient compared to the double door.

The price range of the refrigerator is between Rs. 12,500-18,200 for 190-210 litres. About seventy percent of the company’s revenues were from the green products of the company, including the washing machines which consume 55 percent less water. The company is also manufacturing televisions on a pilot basis but the project has been out on hold as it was not economically viable to sustain the campaign due to the devaluation of rupee. During the festive time the company is expecting a 50 percent growth in turnover during the festival period.